Music Theory For Bass – Key Signatures & The Cycle Of Fifths

This latest lesson on Music Theory for the Bass Guitar covers the concept of key and key signatures as well as the Circle Of Fifths.

First, let’s take a look at the major scale pattern we looked at in the first lesson.

The major scale is built up from a pattern of tones and semitones.

The intervallic construction of this scale would be:

This pattern can be moved around the neck easily to create a major scale in any key.

The key of a piece of music relates to the scale we use as our pallet of notes. If we use the notes of the C major scale to write a piece, then the key would be C major.

This relates to a deeper concept known as tonality. Most Western music is based on the idea of tonality, meaning that the notes in a piece all relate back to one master note – the tonic. The tonic should evoke a feeling of home and resolutions. All the other notes (both in and out of the key) create varying amounts of tension that pull back to the tonic. You can hear this pull if you play a major scale and stop at the 7th. The 7th wants to resolve to the tonic as there is a strong tension that is released at the resolution.

A key signature is a label at the start of every stave to show what sharps or flats are in that key.

In the key of G, there is an F#, so the key signature will have one sharp.

Here are some more examples of keys and their key signatures:

The circle of fifths is a series of consecutive perfect 5th intervals that eventually work their way back round to the original note. The cycle tells us how many sharps and flats are in each key. It starts at C, which has no sharps or flats. The next note – a fifth higher – is G, which has a key signature of one sharp. Up a fifth again is D, which contains two sharps. This pattern continues until it comes back around to C. 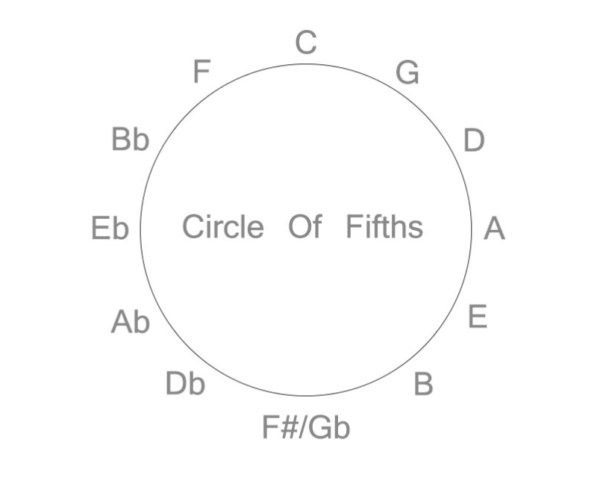 The circle of fifths is a really popular way to learn your key signatures, but it can be a bit hefty to memorise all in one go. I use two different sequences of note names to remember the order.

If you recite the first sequence over and over to yourself for a while then it will eventually stick in your head.

The second sequence is easier to remember because it is just F followed by the word BEAD and then G and C.

Once you have memorised these note orders, the next thing you need to do is remember that the first sequence is the order of sharps and the second is the order of flats.

These sequences show the order that sharps and flats get introduced into the key signatures. Let’s take A major for example. We know that A is the third point on the circle of fifths so it must have three sharps.

Now we can use the first sequence to find out what notes the three sharps are. To do this, we simply count the first three notes.

This means that the sharps must be F#, C# and G#. Here is the A major scale in order:

This principle also applies to the flat keys, but we use the second sequence instead.

Let’s work out the key signature of Ab major.

Ab is the fourth point on the circle of fourths (the circle of fifths in reverse), so it must have four flats. For this sequence, you have to ignore the F at the beginning and start from the B. From this, we can see that the flats in A major are Bb, Eb, Ab, and Db.

Here is the whole scale: