Music Theory For Bass – Chords In A Major Key

The lesson shows you how to construct chords from each degree of the major scale so you can create your own chord progressions and understand why certain chords have particular qualities.

Chords In The Major Key

As bass players, we tend to think of playing just one note at a time and can easily forget to pay attention to the movement and quality of the chords. Knowing what chords are in each key and what notes are available to you in those chords will really improve your playing. Let’s start with the C major scale:

If we take the C major scale and skip every other note so we are left with the 3rds then we get this:

Because we can see that the notes we are left with are the root, 3rd and 5th, we know we have a C major chord. We can use the same scale and formula to work out the next chord.

Here, we get D, F and A. D to F is a minor third so we know that this chord must be a D minor. Similarly, if we do this from E then we get an E minor chord.

If we apply this process to each scale degree then we end up with a sequence of chords. We refer to these chords by number and they are often written as roman numerals.

Chords of the Major Key

Starting each chord on the A string, play through the following exercise to get your fingers around each chord in the key of C major. 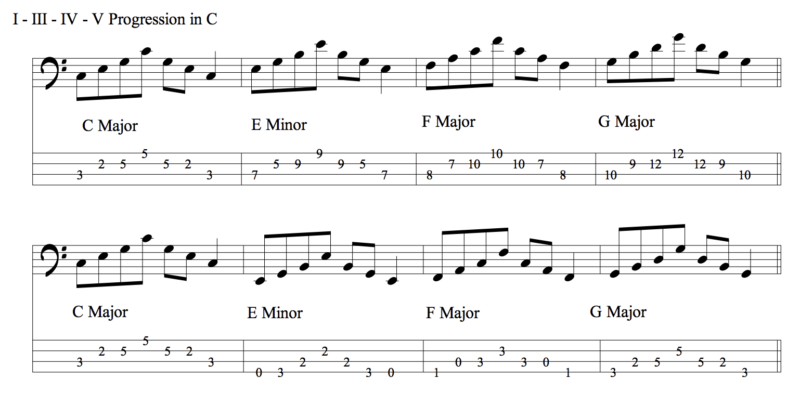 This opens up a whole load of possibilities for writing music as now you can refer to the different notes in each chord and know that they will always work.

The Study Of Harmony

There is more to creating chord progressions than just picking random chords from within a key and placing them together. We call this subject the study of harmony. Now we know the basic triads within the major key, we can extend the chords to include 7ths. We do this by adding an extra 3rd to the end of the triad. Let’s take the C major scale again and take every other note to get C E G B – a C major 7 chord.

Just like with the triads, we can build a 7th chord off every scale degree.

As before, try playing every 7th chord arpeggio in C starting on the A string. 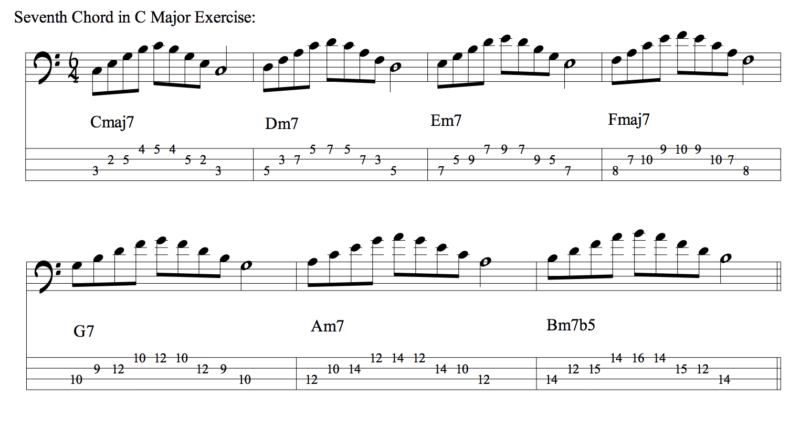 Now let’s play through the chord progressions we practised earlier but with the 7ths added.