In many of my lessons I’ve mentioned hammerons and pulloffs in passing. The slap lessons featured lots of little hammer on riffs. But I’ve always just assumed a prior knowledge of them so here I’ve decided to give a brief introduction to the technique so you can start spicing up your basslines with some smooth legato feel.

A hammer-on is simply a way of playing a note without picking it. You literally hammer your finger on to the note you want to play and the velocity should be enough to make a sound. Hammer-ons are usually played after a picked note otherwise it loses its smoothness. Doing it this way also ensures we don’t have to hammer down too hard.

Try a basic hammer-on by picking and playing a D on the 5th fret of the A string and hammering on the E two frets up with the left hand.

Compare the sound of the hammer-on to what it sounds like if you pluck both notes. Try to match the volume of the plucked note when you are hammering on so your tone doesn’t sound weak. You can practice this by going round and round the last exercise like this:

You can play hammer-ons with any finger, so try using both your third and fourth fingers for this exercise. Use this next phrase to practice hammer-ons with your second finger.

Let’s put this new technique into context by playing a riff that incorporates the two hammer-ons we just learnt.

Again, try using different fingers for the hammer-ons and see which feels the most comfortable.

To expand on this riff and give it more feel, you can choke the open E string to make it shorter – this is called staccato and is represented in the notation by a tiny dot above or below the note. This will make the exercise a little trickier as the left hand has a lot more to do, but it adds a bit more character to your line.

When you first start learning to do hammer-ons, you may find that your fingers are not strong enough to produce the crisp, clear note you are after. Your finger strength will improve the more you practice them, so here’s an exercise to get you started: 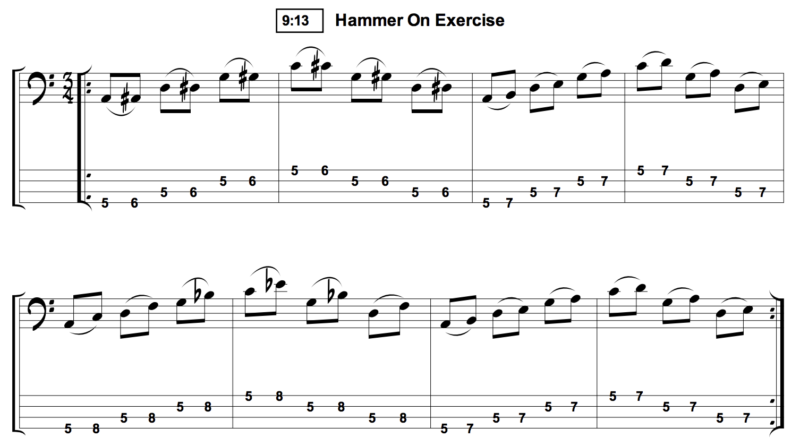