What Is Alternate Picking?

When we play fingerstyle on the bass, it makes sense to use our fingers in the most efficient and logical way. Most people use two fingers and alternate them (you can use more or less picking fingers but it is up to personal preference). Alternate picking involves playing consistently between the 1st and 2nd fingers on the right hand. You can start on either finger which means that it is easy to lose track of what finger comes next. If you don’t pay attention to what fingers you are using then you could end up raking across strings or using one more than the other.

This next riff only has one string cross so you can isolate that movement to focus on your alternate picking. Again, try the exercise starting on your 1st finger and then swap to starting on your 2nd finger. You might notice that it feel more natural to rake the string cross, but it is more important to practise being aware of your fingers for now.

Practising alternate picking using arpeggios is a great way to get used to crossing strings efficiently. Here is an exercise over two different types of C chord – major and minor. 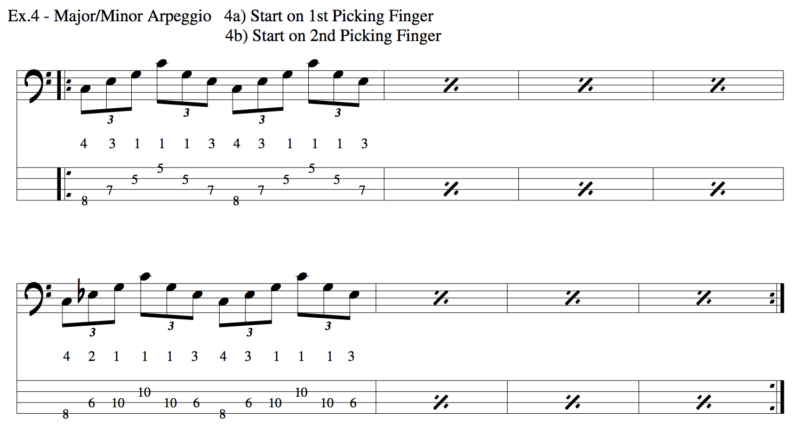 Odd number patterns are great for forcing you to accent or lead with both fingers because each repeat starts on an alternate finger. To see this in action, begin by playing a repeating pedal note and accenting the first beat of every group of four. You will notice that the accent lands on the same right-hand finger every time. Now, do the same thing but accent the first beat of every group of three. The accented note should now fall on alternate fingers.

The beat will fall on alternate fingers in any time signature with an odd number at the top. Try these variations in 5/8 and 7/8.

To put this new technique into the context of a song, have a go at this riff from ‘Pound For A Brown’ by Frank Zappa.

This last riff is in 17/16 and is another great exercise for practising alternate picking in odd time signatures. As always, start slow and make sure your technique is correct before moving up in speed.