This week I’ve got a great little music theory exercise for you that will help with learning the notes on the neck, some essential arpeggios, the chords within a major key and the circle of 5ths!

For this exercise we will be playing through the chords of the major key in order, both ascending and descending from root notes on one string. We want to try this with all three fingerings for each arpeggio type, in all keys.

This might seem a little tricky at first so let’s work through the exercise in simple steps.

So just in case you didn’t know, a major scale is based on a formula of whole steps and half steps or tones and semitones. The formula is as follows:

A whole step is 2 frets of distance and a half step is 1 fret of distance. So let’s try that C major scale on one string using our formula:

This gives us the notes of C Major: C D E F G A B. If we apply the same formula of whole/half steps working from F we get the F Major scale: F G A Bb C D E. This applies to every major scale.

Learning those notes on one single string can be a huge problem for some bass players that haven’t worked on their fretboard knowledge. So try playing through the scale, saying the notes aloud and focus on how the notes relate to the fret markers.

Play up and down the C Major scale until you have it under your fingers.

Chords Of The Major Key

Every key contains a set of chords starting on each note of the scale. The Major Scale has seven notes and this means every key has a set of seven chords.

The sequence of triad chords in the Major key is as follows:

Applying this set of chords to the C Major key results in the following sequence:

In the previous list we encountered 3 types of triad: The Major Triad, The Minor Triad and the Diminished Triad. These chords can be played on the bass as arpeggios (a chord played one note at a time).

These are the most common fingerings but there are many ways to play any arpeggio or scale. We’ll cover some other fingerings for the arpeggios later in this lesson.

Now we have some arpeggio shapes, let’s apply them in our exercise. We can play the appropriate arpeggio for each chord working through our scale on one string: 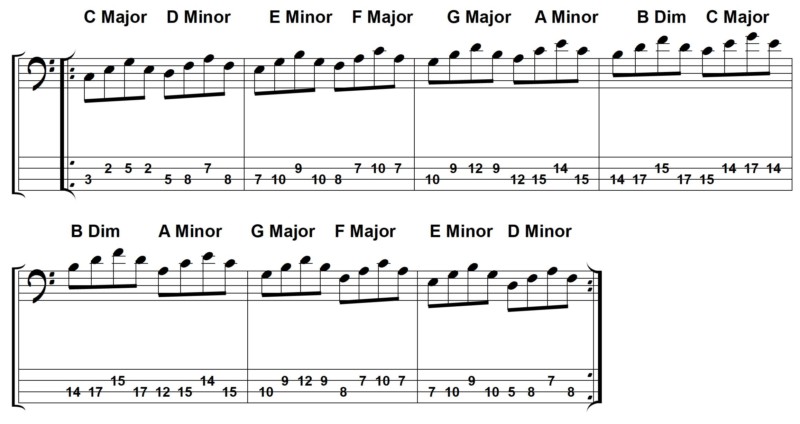 As you can see, this is a great exercise for learning the chords within a key.

For each arpeggio we’ve covered, there are three different fingerings from any one fret position. We can roughly label these by the starting finger but there are exceptions. The common fingerings are from a root note played with the 1st finger, 2nd finger and 4th finger as follows: 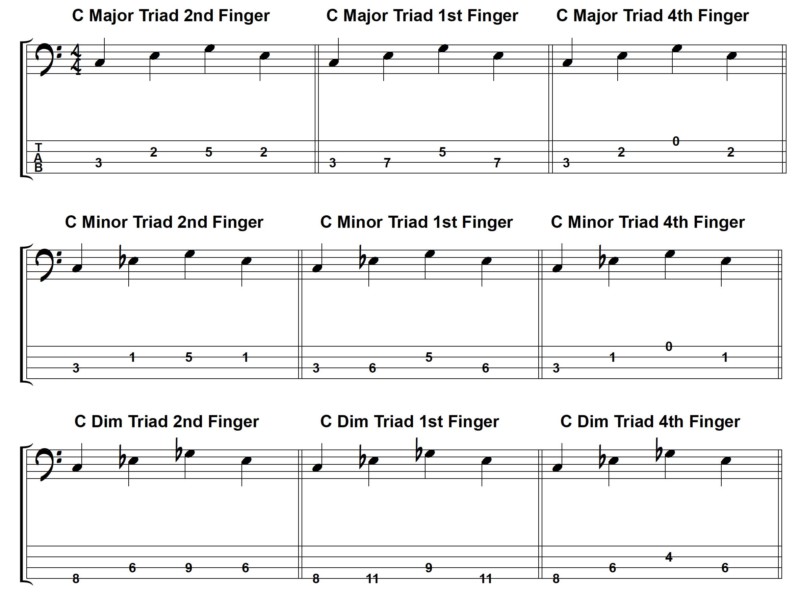 Now we have three patterns for each arpeggio, let’s try the exercise again and use each pattern in turn: 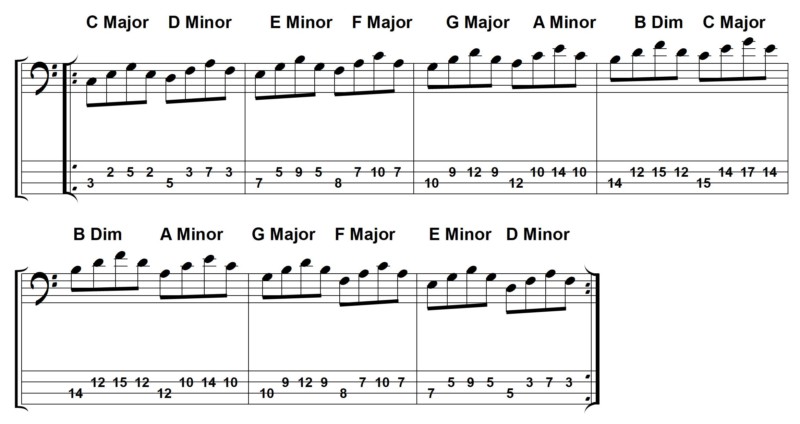 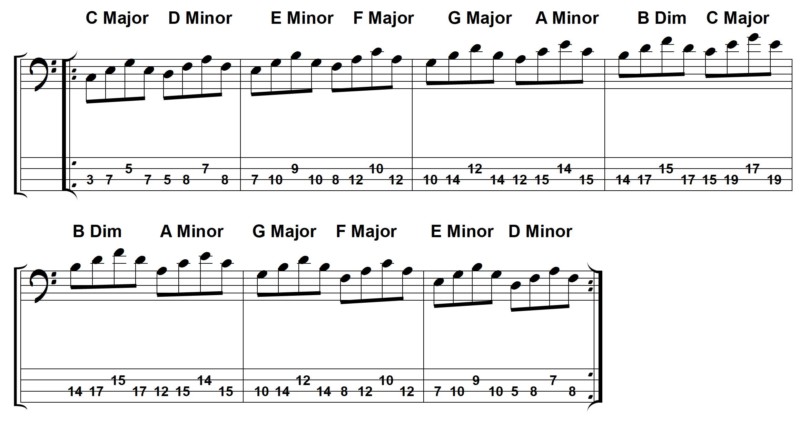 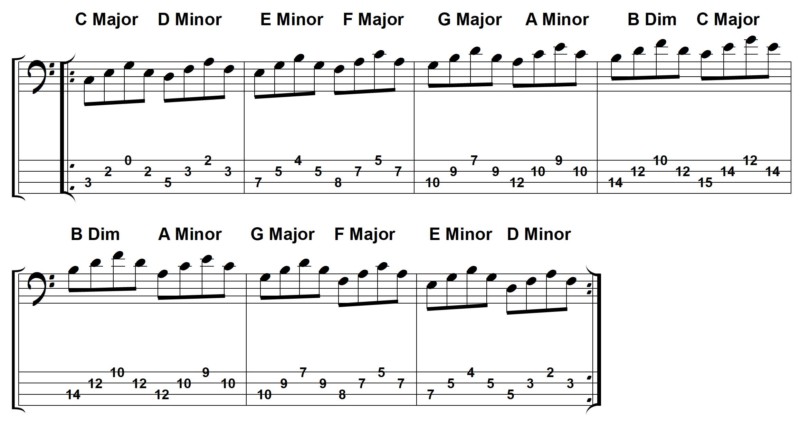 Working Through The Keys

All that’s left now is to work it through every key and this is where the exercise gets tough and really excels.

To play the exercise in a different key, you have to know the notes in the key and be able to see them on the neck. Also, by saying the chords out loud as you go, you’ll learn the pattern of chords in that key. This is really important when developing a knowledge of scales and keys. 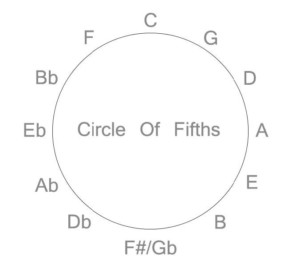 The circle of fifths is just an ordering of notes that you see in the clockwise direction. The cycle starts at C and moves upward by a perfect 5th interval each time giving us the notes C G D A E etc.

For the circle of fourths we just work around in a counterclockwise direction giving us C F Bb Eb etc.

So that’s the exercise. I won’t be working through any of the other keys by note in this lesson because it’s important for you to work them out for yourself. Some of you may be able to just play it straight away through every key and if that’s the case then great. But I suspect most of you will find this quite tricky or even impossible at first. So follow the steps I’ve provided and practice each one in turn until you have them sufficiently nailed. Then move on.