The 2 MUST KNOW Scales For Playing Over EVERYTHING!

This week we’ll be looking at the 2 most flexible and common scales you’re ever likely to use in your bass lines: The Major and Minor Pentatonic scales. Pentatonic scales are simple 5 note scales so there are literally hundreds of possible variations.

But the most common are the Major and Minor Pentatonic. In this lesson we’ll work through a basic 1 octave shape for each scale and then apply them to a simple chord progression.

The two scales we are going to look at today are the major and minor pentatonic scales. If you haven’t seen the previous lessons on this topic then here is a quick recap:

Here are some examples of major and minor  pentatonic scales. Start with C and then try the other positions given before moving to other root notes.

Another exercise you can do to help memorise a new shape is to repeat the scale and climb up the neck by moving the it up a semitone each time. 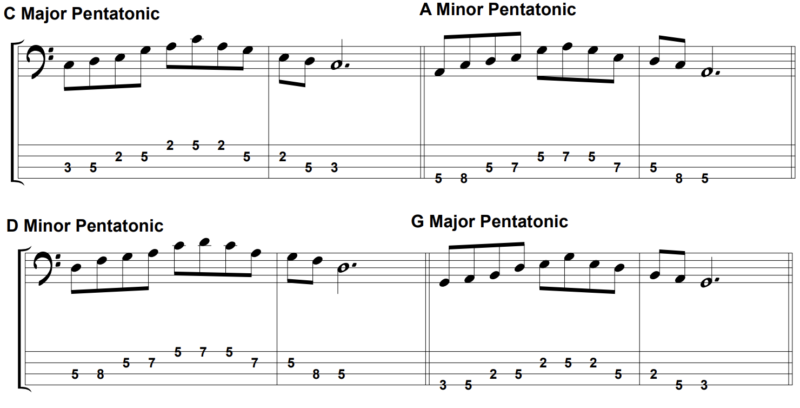 Pentatonic scales work over a lot of different chords because they are missing the two most dissonant tones in the respective natural scale.

The minor pentatonic does not contain the 2nd or the 6th degree of the natural minor scale.

The major pentatonic does not contain the 4th or 7th degree of the major scale.

Try coming up with your own riffs using these new scales.

We can use the major and minor pentatonic scales over a chord progression such as the one below. Here are the scales we can use for each chord:

Using the scales given above, create your own bass line to the following chord progression: