As a song example, we’re going to look at the Pearl Jam classic ‘Jeremy,’ which features probably the most famous 12 string riff of all time.

A 12 String Bass is pretty much the same as a 4 string bass, but for each of the 4 strings, we have two extra, light gauge sympathetic strings tuned an octave higher than the regular string:

You play it like a regular 4 string and generally with a pick, as those extra octave strings add a beautiful sparkle and chime to the tone. Think 12 string guitar, it’s the same effect, but for the bass. Also, the fact that it has two sympathetic octave strings helps in competing with the overwhelming power of the main bass strings, and the tiny deviations in tuning for all three strings adds a cool chorus like effect for each individual note.

12 string basses are more popular than you might think. Tom Petersson of Cheap Trick is one of the most famous 12 string players, Doug Pinnick of Kings X is another, John Paul Jones has dabbled with an 8 bass in the later music of Led Zeppelin. The most famous 8 string riff of his being ‘Achilles Last Stand’ from the album ‘Presence.’

He’s since moved onto entire albums featuring 8, 10 and 12 string basses. Check out his solo albums ‘Zooma’ and ‘The Thunderthief.’ For now, we’re going to look at Jeff Ament’s famous 12 string playing with Pearl Jam.

The most obvious example of a 12 string bass in rock history is undoubtedly ‘Jeremy’ from the album ’10’. Jeremy was a big hit and Jeff plays a complete solo intro and outro with his Hamer 12 string bass.

To create the 12 String tone we need to imitate the octave-up strings by using an octave pedal and we can add more of that huge grinding sound by adding overdrive into the mix. For this example I’m using a POG 2 pedal for the upper octave. We want the dry signal set to maximum and the octave+1 set to around 90%.

The POG is a great pedal with perfect tracking but the synthesised octave tone can be very digital sounding. Adding distortion will help to sweeten the tone and also add more of that distinctive 12 string grind. For this example I’m using a Darkglass Alpha Omega pedal set to add just a little overdrive rather than flat-out fuzz. 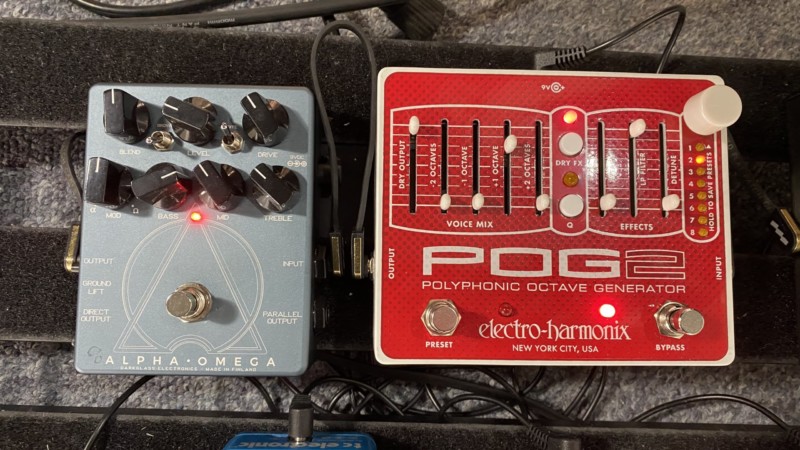 Jeremy, played by Jeff Ament is the perfect example of 12 string bass in a rock song. There’s even some nice use of harmonics shown on the stave and TAB in bars 3 and 5.

The harmonics are shown as hollow diamond shaped notes on the stave, while they are shown as fret numbers in brackets on the TAB below. Several sections from this bass line are included below. 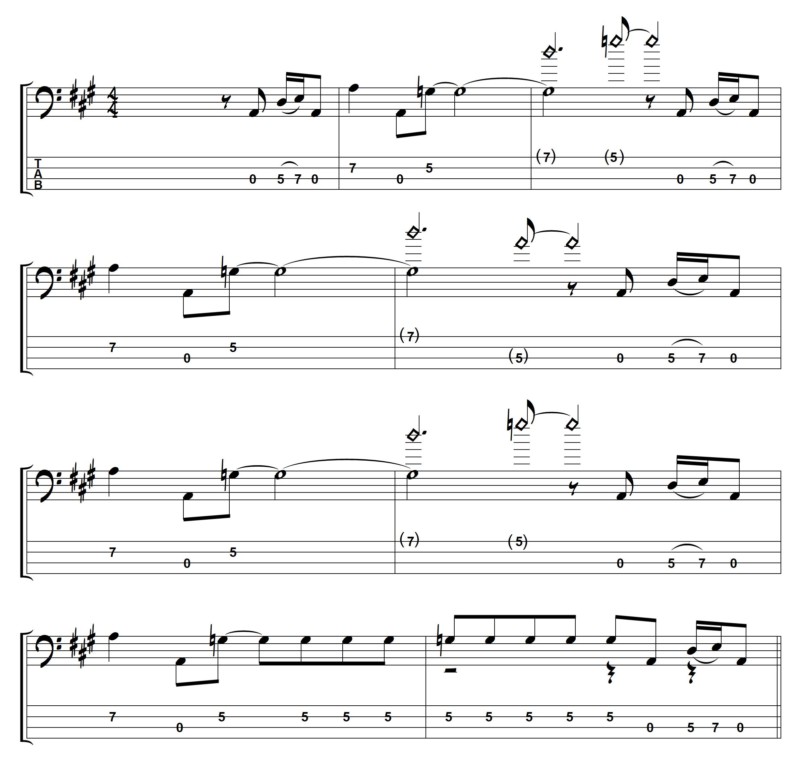