Last week we looked at a simple way of creating Major Pentatonic Runs using a simple scale pattern. This week we’ll extend that pattern both above and below to create some cool extended runs.

This lesson carries on from the previous lesson on the major pentatonic scale – be sure to check that out before continuing on with this page.

Last time, we learnt how to play a one-octave major pentatonic scale in the key of C major. Now, we can extend that scale each way so we have more to play with. Here is the major pentatonic scale again, but this time we will go up past the C to include the 9th (D). We will also continue the descent below the root to include A and G. We are not going to start on the lower notes as we want the root to be the main point of emphasis.

It is useless learning a scale if you never put it into context, so here is a run based on the extended version of the pentatonic scale we just learnt. The run starts on the 9th (D) and goes below the root (C) to include G and A. The fills ends on a G, which creates a perfect cadence and leads nicely back to C.

To put this fill into context, we can use it at the end of four bars of C: 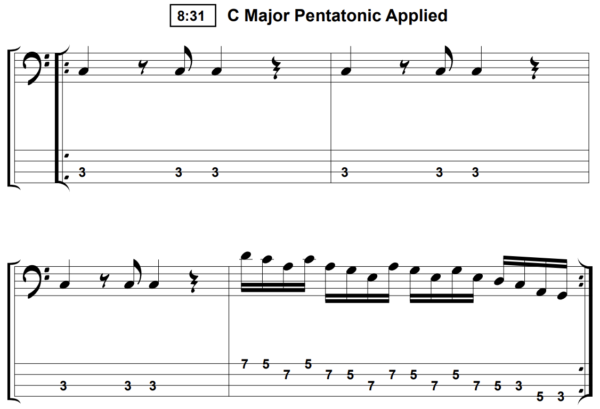 Notice how the run uses tension and release to make the progression want to return to C. This is one way you can use fills to create a stronger resolution and make lines more interesting.

Note: Don’t start too fast! It’s easy to rush the first few bars and then get caught out when you get to the 16th notes. Instead, work out what speed you can play the run at comfortably and begin the exercise at that tempo.

If we wanted to begin a scale on the E string then we would need a different pattern in order to have access to enough notes. Learning a two-octave shape will let you create higher runs without having to go below the root. Here is a two-octave major pentatonic scale in G and F:

Now we can use the two-octave pattern to create another run that travels down the fretboard. Here is the same riff in G and F – try fitting them both into the chord sequence from before. 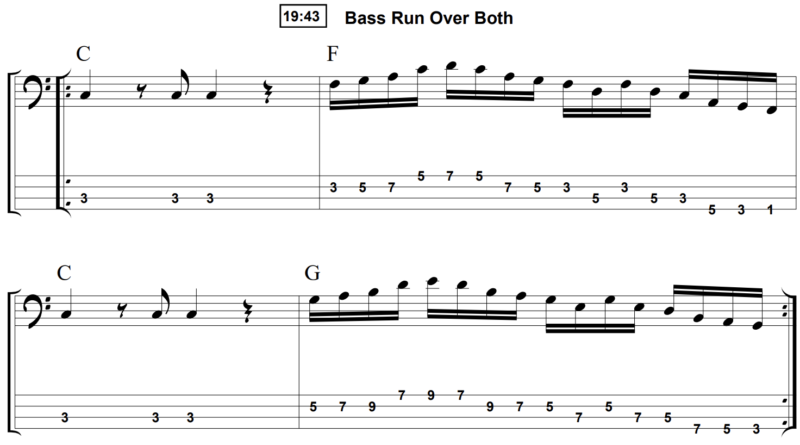