Today we’ll work through the two most common arpeggios, Major and Minor and have a little look at how they can work in a bass line.

The major arpeggio is made up of a root note, a major 3rd and a perfect fifth interval, all measured from that root. Don’t worry too much about the theory for now if you don’t know your intervals, just look to get the notes under your fingers. 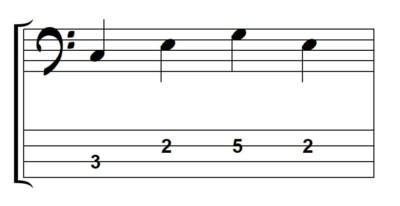 Exercise: Try playing up and down the fretboard chromatically one fret at a time. So we start with C major, then C# major and continue all the way until you reach the high C at the 15th fret. Then work your way back to the starting point (see video)

The minor arpeggio is the same as the major arpeggio but we have a minor 3rd instead of a major 3rd. So we simply drop that second note down a half step.

As an example of how arpeggios can be the key to developing our bass lines and understanding how other bass lines work, let’s take a simple chord progression of C major – F major – G major – C major.

We could play through that progression using root notes only: C, F, G, C. But if we want to add a little more melodic interest we can make use of the arpeggios to outline the progression:

Obviously you don’t need to be playing full arpeggios for every chord progression you play along to. These arpeggios are simply a basic palette to work from and you can learn how to use those extra notes in isolation.

For example, I might just use root and fifth, root and third or any combination of them all. You need to learn the sound of each chord tone and how they work in a bass line.

As an example of the minor arpeggio let’s just switch each chord to minor: C minor – F minor – G minor – C minor. If we play the arpeggios through that sequence we’ll get the following:

These arpeggios are the most basic and common triads you’re likely to encounter so they’re important learning for any bass beginner. Play around with them, play them up and down the neck, try playing through some chord progressions and add some of those extra chord tones into the mix.

Once you have them under your fingers you’ll also start to see those shapes in the bass lines for loads of songs  and once you can recognise those arpeggios in application you’ll start to understand how bass players write those bass lines.