This is the first in a short series of lessons devoted to playing bass on a 12 bar blues. I’ll be covering Blues Rock and Jazz Blues in upcoming lessons.

Please Note: On this video the backing track has a very full sound and the bass can sound a little overpowered on smaller speakers. If you have problems hearing it be sure to use either headphones or larger speakers (desktop etc.)

Many styles of music, ranging from pop to jazz, use a common chord progression called the twelve-bar blues. It is really important to learn this sequence and develop a good feel for it. Once you have it firmly memorised, you’ll have the advantage of instantly knowing hundreds of thousands of songs based on this progression.

The general progression for the Twelve Bar Blues is as follows:

Learning the sequence by number helps with moving to different keys.

For now, we will only be using chords I, IV and V. It is important to know those particular chords in every key as they are so common and are used in 99% of tunes you hear. You might get other chords in there, but I, IV and V are the main chords of the key. They are sometimes called primary chords.

Next we can number the notes of the Major Scale from 1 to 7:

Using this number system we can easily find the chords 1, 4 and 5:

The beauty of knowing chords by number is that we can easily move keys.

To find chords I, IV and V in Ab for example, then we would simply count up through the Ab major scale:

In blues, I, IV and V are normally played as dominant chords, which contributes to the classic blues sound. To make each chord dominant, we simply take the triad and add a minor 7th.

This may seem confusing to those of you with a knowledge of diatonic harmony. Normally, the chords in the key of C major would be as follows:

This goes against standard diatonic harmony so don’t think about it too hard! The main reason we make every chord dominant is so we can take that bluesy sound and move it around.

Here is a simple bass line for the twelve-bar blues in the key of C:

Although practical, playing root notes like this can become a little tedious. We can make use of simple melodic devices to add some interest. First of all, let’s have a look at a basic chromatic approach from chord I to chord IV:

Here we are using a double approach to lead into the F. Try adding this lead into the chord progression between chords I (C) and IV (F).

We can also use chromatic approaches from two notes above or below the next chord, (this works for every single chord in there). Here is one example of approaching the F in this way:

Here is the approach from below:

Learning progressions by number makes it easy to transpose a song to any key. As an example, we’ll transpose the twelve-bar blues into the key of F.

First of all we need to count up the F major scale to find the root notes.

We know that every chord must be dominant as we are playing in a blues style so the notes of each chord would be as follows:

In blues, the bass will often play a steady, repeating riff made up of the notes of the chord in use. You’ll hear these riffs in loads of different songs so just listen out for them and learn as many as you possibly can. They are a great way to get to grips with this style and are handy for blues jams.

Here’s an example of a simple Blues Riff:

This uses degrees 1, 3, 5 and 6 of the major scale. We can transpose this to the key of F to find the notes we need to play this riff over our F7 chord:

If we play this riff over chords I, IV and V, we can play through the whole progression as follows: 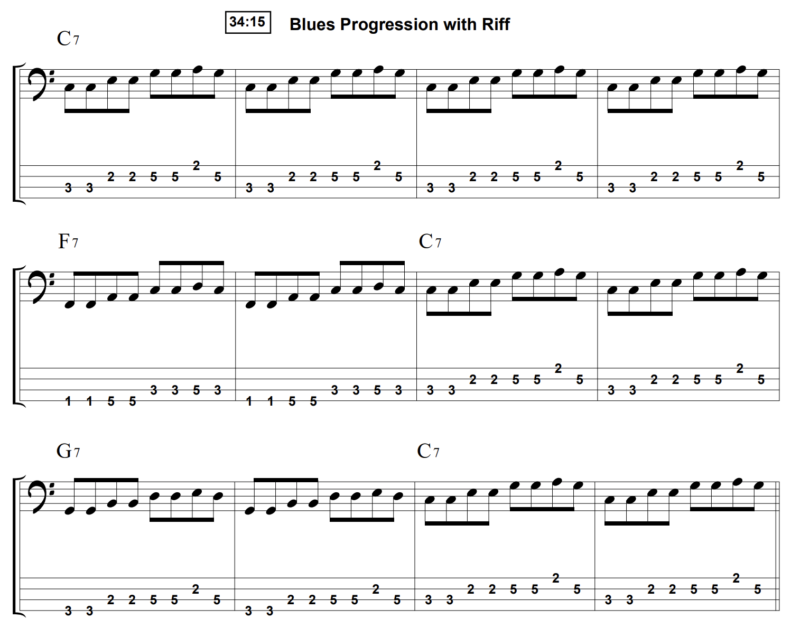 To spice this up a little, we can add a sneaky little triplet… (B.B. King fans will recognise this from his song Paying The Cost To Be The Boss).

There are many variations on the twelve bar blues progression that can become quite far removed from the original. For now, we are going to concentrate on two simple variations.

Our first variation makes use of an additional chord IV in the second bar and again in the tenth bar:

The second variation is the same as the first, but we return to chord V (G7) for the last bar: 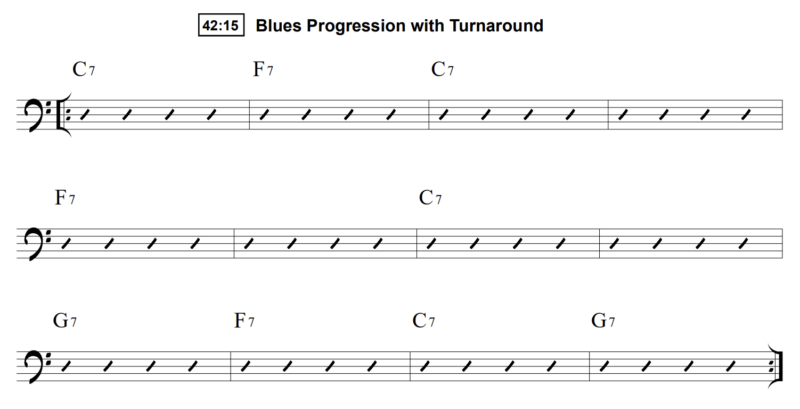