Simple Shredding For Bass Guitar (with the help of some cool Billy Sheehan style Tapping!)

Today I’m going to show you a little tip for those of you that want to shred with some tapping licks in the style of guys like Billy Sheehan.

To anyone new to tapping especially in a rock style, the first kind of licks you learn are usually arpeggio based (think Eruption by Van Halen!)

Now they’re great and sound cool but if you want to take your tapping a little further and play some longer lines in that Billy Sheehan style, it’s good to try outlining some scales. These are a lot tougher on the hands but also great for running around the neck and you’ll hear them a lot in the unison bass and guitar lines that Billy played with Paul Gilbert in Mr Big.

So for today’s exercise we’re just going to learn to outline a simple major scale and run it on one string. First let’s look at the basic tapping pattern we’re going to use:

Scales On One String

The next step is to familiarize yourself with the scale you’re going to use on a single string. For this exercise we’ll be using the C Major scale. Let’s look at that on a single G string:

Our line will be outling the scale in three note groupings so next we can play those groups on a single string:

Tapping Through The Scale

Once you have the scale under your fingers you can try running the tap pattern through those notes: 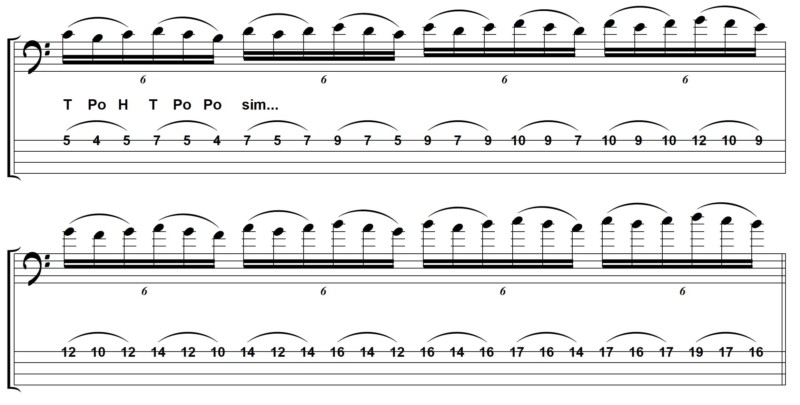 Once you can play on one string you can also try moving across strings, but I’ll leave that for a later lesson!