Transform Your Bass Chords With Inversions

This week we’re looking at bass chords. When you first learn chords you generally learn chords from the root note upwards. But we can learn chords starting from other chord tones like the 3rd or 5th. These are inversions and can help create great voice leading in the bass line.

OK so I’m going to assume a little bit of knowledge on your part for this lesson. I’m assuming a knowledge of the basic triads and seventh chords on the bass. If you don’t know them then check out the following bass lessons:

So let’s now look at inversions. What is an inversion? Well an inversion is a chord played from a note other than the root note.

So let’s look at the notes of the C major triad:

We have C E and G. They are the root note, the major 3rd and the perfect 5th. But those chords can be laid out in a multitude of different ways on an instrument. As long as we have those 3 notes in there it’s a C major of some kind.

So even as an arpeggio we could play them as C E G or E G C or G C E (see below). These are inversions.

So if we start on the root note C that would be what’s called a root position triad. C E G:

If we start that series of notes on an E the third (E G C) that’s called first inversion:

If we start at the 5th G (G C E) we have what’s called second inversion:

We can continue this method for seventh chords, 9th chords, 11th chords and 13th chords. Start at the 7th and it’s third inversion, the 9th and it’s fourth inversion and so on.

Now we can play chords one note at a time as an arpeggio but in dealing with chords we don’t have to worry as much about the ordering of the notes in an inversion.

So now let’s look at some inversion shapes for the bass. I’ll build each chord from a root note of C and we’ll start with the Major and Minor Triads:

So that’s the chords, now here we have a short progression using those inversions in the key of C. The fingerpicking pattern is demonstrated in the video. Follow the chord fingerings in the tab below: 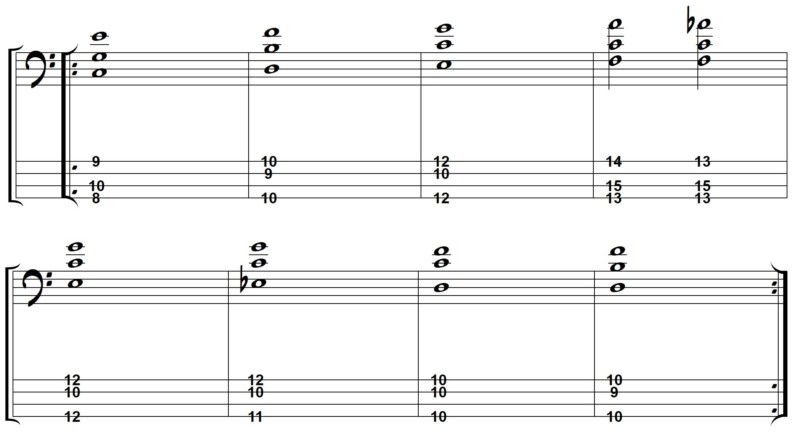 So that’s inversions. They have a really cool sound and can make a big difference when looking to create a bit of variety in the voice leading and bass movement. So try them out, experiment with them in as many progressions as possible.