This week we’re going to be looking at one of the most famous bass riffs ever: Good Times by Chic.

This awesome riff is played by the one of the funkiest bass players of all time Bernard Edwards. We’re going to look at some of the 16th note rhythms in there and the chord tone outline of the progression.

First, as always, let’s work through that riff. It’s in E minor and originally played at 110 beats per minute: 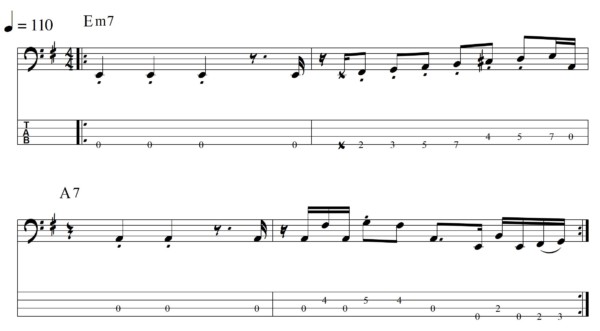 One of the most important aspects you need to nail in this riff is the rhythm. Most of the riff is actually pretty straightforward. To begin, we’ve got simple hits on the beat and then we’ve got straight 8th notes on the climb up through the scale. But we’ve also got some little syncopated 16th notes acting as anticipations for bars 2, 3 and 4.

The gaps preceding those 16th notes can cause the line to be sloppy and that can result in a rhythm section lacking that ‘tight’ feel.

The key to dealing with those gaps and the 16th notes is to subdivide. You can count 1 e and a 2 e and a etc. or you can use your own vocalisations (as demonstrated in the video). Either way, you need to be counting along through that space. Yes, you might be able to simply feel it OK without any counting and subdividing but if you want to be accurate, subdividing is always the key!

Chord Tones? But I Thought It Was A Scale!

So, for the chords, we basically have an Em7 to A7 progression. There are some suspensions in there at times in the guitar part but the basic tonality is Em7 to A7.

Now, it’s important to know it’s actually in E minor. I say this because it’s very common for people to see a sequence like this and instantly think II V progression. It’s easy to see why. We have movement by fourth and a minor 7 to a dominant 7 chord. That’s all VERY ii-V. But a II-V progression would imply we’re in the key of D major. We’re definitely not in D. The tonic note is E.

Breakdown Of The Line

First we need to know the chord tones for each of the chords (Em7 and A7). Below I’ve written them out spread in such a way that we can see how the bass line relates:

Using these arpeggios you can see how the line ascends through the chord tones over the Em7 and then works around the root, 6th and 7th over the A7.

The major 6th to minor 7th move is VERY popular in funk riffs so it’s worth paying special attention if you’re looking to get your groove on!