This video is the second online bass lesson in the series on bass line construction. The previous lesson focused on doubling the bass drum and this lesson introduces the use of chord tones to create some interest in the line.

If you haven’t already, I recommend looking at the previous lessons on chord tones as it will make this one a lot easier to follow.

Last lesson, we followed a chord progression whilst doubling the kick drum pattern to create a groove. Now that we have a place to begin rhythmically, we can start to expand our note choices beyond the root.

Let’s take a basic I, vi,  ii, V chord progression in the key of C major:

Each of these chords is made up of four chord tones.

If we play all of the tones in a chord at the same time it is called a block chord.

If we play the tones one after another it is an arpeggio.

Arpeggios are a fundamental aspect of bass playing as we are not often required to play block chords in a band situation.

This section contains three types of 7th chord that you are very likely to come across in a chart or song. 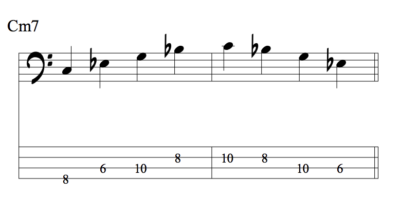 Practice these arpeggios all over the neck until you really have them under your fingers.

Now let’s return to the I, iv, ii, V chord progression from earlier:

Play each arpeggio in order and you will hear the natural progression of the sequence through the chord tones.