This week we’re looking at how to play Bossa Nova bass lines. We’re breaking down the most popular Bossa Nova, The Girl From Ipanema by Antonio Carlos Jobim (most famously sung by Astrud Gilberto).

Those of you that have taken any kind of cocktail gigs will have, at some point, had to play a Bossa Nova. It’s a style that some of you will unfortunately associate with elevator music. But if you can get past that modern stereotype you’ll find a great Brazilian style that’s lovely to play, full of rich harmony and a perfect laidback vehicle for working on many aspects of your playing.

The Girl From Ipanema

So in this lesson we’re going to look at probably the most famous Bossa Nova tune, The Girl From Ipanema by Antonio Carlos Jobim.

The tune is in F major for the most part and we’re going to just work through the progression several times trying a few different rhythmic patterns out as we read through the chord symbols. 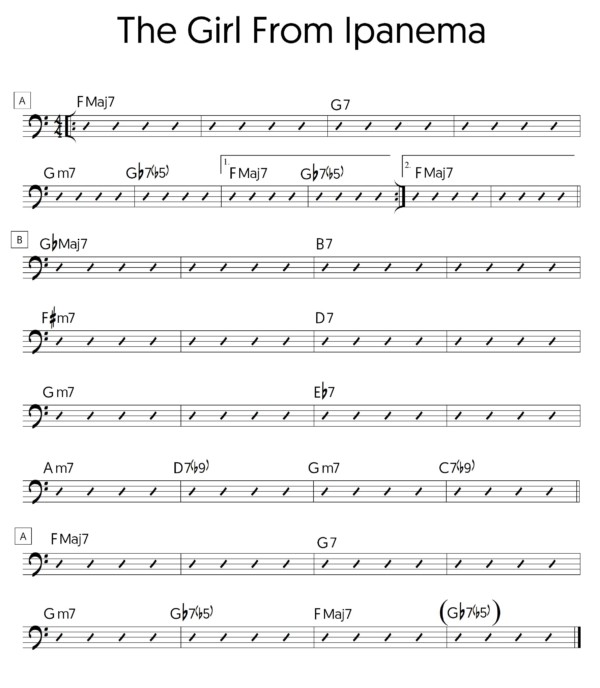 Let’s first look at the most basic pattern you could use for a Bossa. The simple Two Feel. We’re going to play a root note on beat 1 and the fifth of the chord on beat 3.

Note: Many bass players will actually bypass this rhythm when studying Bossa Nova and go straight into the busier, more familiar latin pattern. But I’d recommend trying a simple two feel first because it’s a way of setting up a more laidback feel as our foundation and it’s used a lot in many double bass Bossa lines including original Astrud Gilberto recording of The Girl From Ipanema (have a listen!)

To play this two feel we’ll be using a root fifth pattern. We have two common fingerings for the fifth, above the root and below the root. Below are two examples on a root note of C: 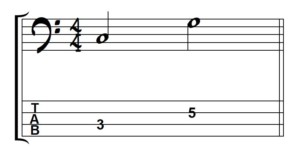 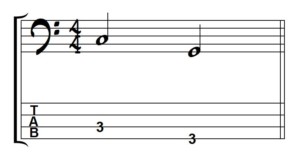 For our first chord of Fmaj7 we could use these two basic patterns in a our low first position for getting started: 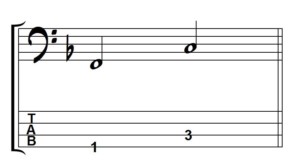 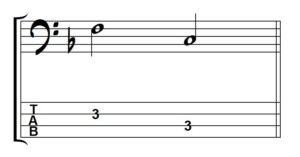 Remember we’re improvising a bass line here. You make the decisions. So try experimenting with different root notes and different fifths as a way of developing your vocabulary and style.

Most of the chords in this tune contain a normal perfect 5th. But we do have the chromatic passing chord of Gb7b5 that contains the flattened 5th.

Note: I would normally see this as a Gb7#11 but we’ll go with the Real book method of writing it as a 7b5 chord just for the purpose of this lesson so you can get some practice at playing Root-b5 patterns.

The Root to Flattened Fifth pattern on a low Gb is as follows: 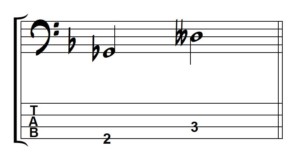 Exercise: Play a Two Feel through The Girl From Ipanema progression (chart and track above)

The most common way to approach a Bossa Nova is by using a dotted quarter – 8th note figure as seen below on an F: 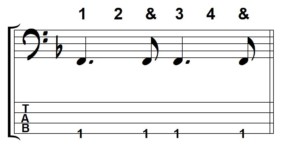 It’s also common to choke the note on beats 2 and 4 to give more of a bounce to the groove:

When we add the 5th of the chord into the groove we find the following bass figure (on an Fmaj7): 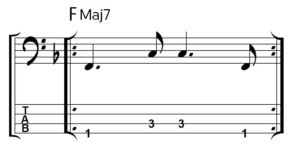 Exercise: Play through The Girl From Ipanema progression using the above groove

As well as the basic Root-Fifth groove mentioned it’s also possible to make use of various melodic and rhythmic variations to add some musical interest (see video).

However, be careful when using these variations. The bossa nova is a relatively laidback style and too much movement in the bass line could be seen as overplaying by other band members or band leaders!

It’s fine to practice more syncopated rhythms and arpeggio/scalar lines as an academic study but take care when applying these techniques on a gig. Listen to the music around you and hear your bass lines in the overall mix as if you are an audience member.