Modes Of The Major Scale Part 2 – Deeper Into The Modes

This is the second of two lessons on Modes of the major scale and I’ll be covering walking basslines, extended scale patterns over the fingerboard, chords within a mode and quartal harmony.

Why Not Just Play A Major Scale?

If you already have a basic knowledge of modes and their construction then you will know that modes are simply the major scale starting from different scale degrees. This could make you question why it is worth learning so many new scales when you could just play a major scale. Using a basic major scale over a major chord is absolutely fine and some players always do this without giving any thought to modes. However, every mode has a unique sound that can spice up your playing by including some interesting intervals that don’t occur naturally in the major scale.

Let’s look at an example in the key of Bb:

You can see here that the second chord in the key of Bb major is C minor and the notes of the C minor triad appear in the Bb major scale. Because of this, we could use a Bb major scale to improvise over this chord, but we would be centred over a root of Bb, rather than C like the chord. This would work as the notes fit within the key, but it would not sound as suitable as a scale with C as the root. This is where modes come in. If we were to play the same Bb major scale but starting from a C, we would get a C Dorian scale. This means that we keep the same notes but use a different starting point that correlates to the chord underneath.

Now you can match a scale to a chord, you need to know how to use that scale to outline the harmony appropriately. Here are a few different techniques you can use to support a chord using a scale:

Scale Motion: Simple stepwise movement up and down a scale. Example of C major scale motion:

Arpeggio Motion (Leap): Simple movement by a third or more. Example of a C major 7 arpeggio:

Enclosures: Enclosure of a target note from notes above and below. Example of both types of enclosure around a C note:

Sequencing: Sequential movement of scale step formula to other scale degrees. Example of 1, 2, 3, 4 formula through other steps of C major:

Repetition: Repeating a short phrase. Example of a descending phrase in C Dorian:

(Each pattern is in the order 2nd finger, 1st finger, 4th finger) 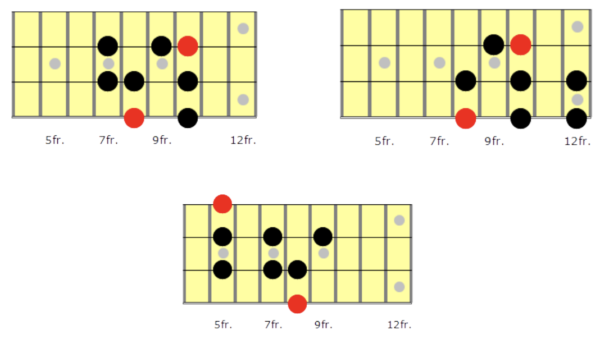 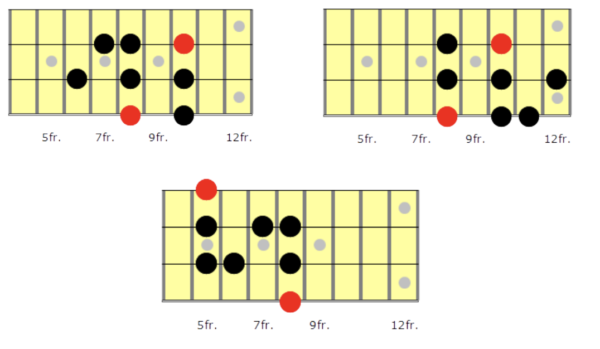 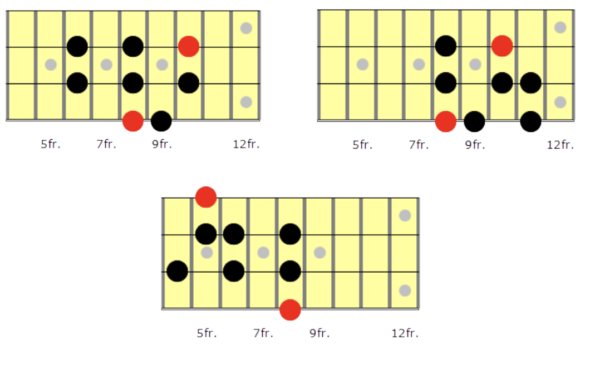 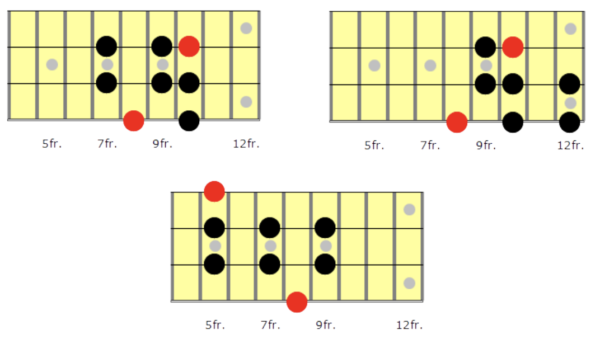 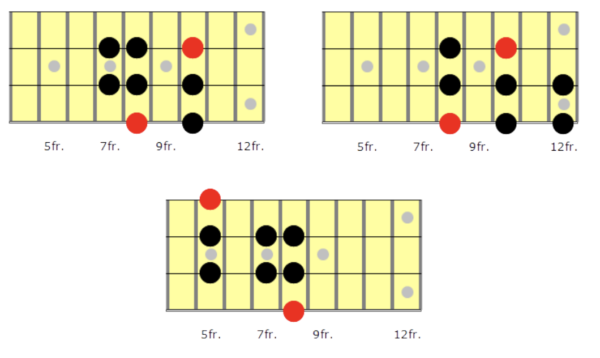 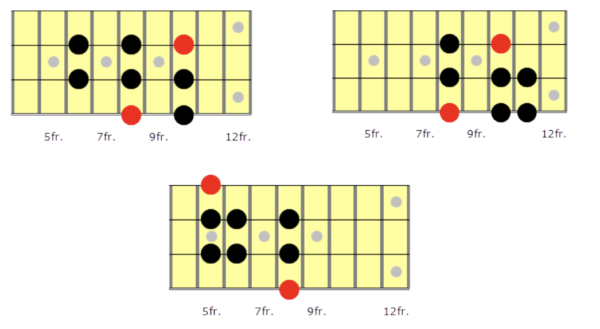 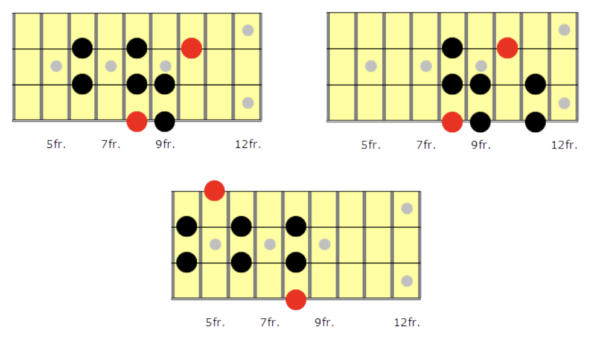 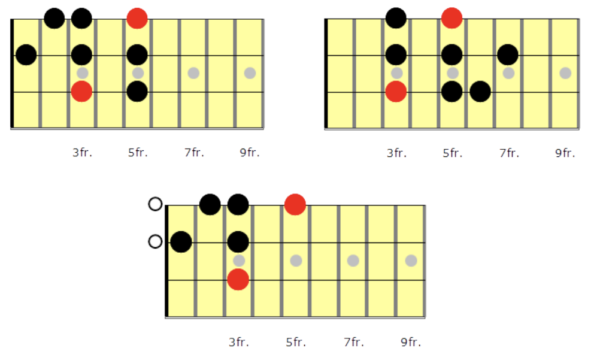 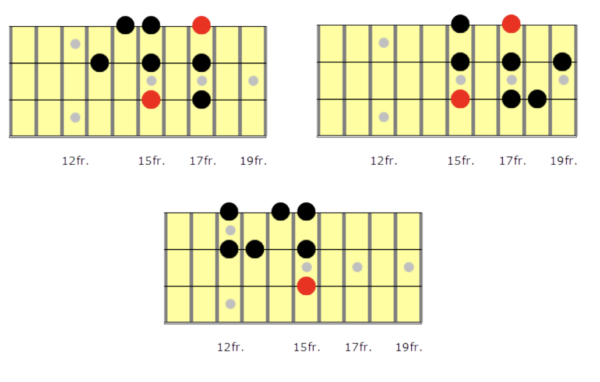 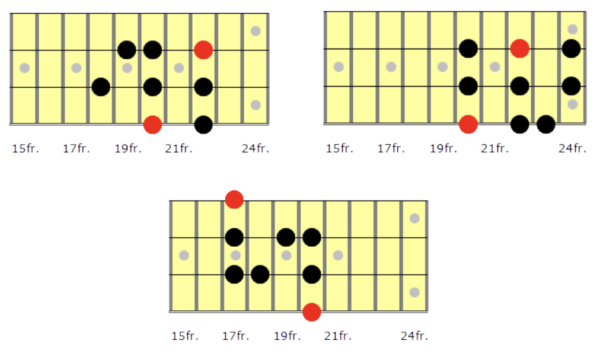 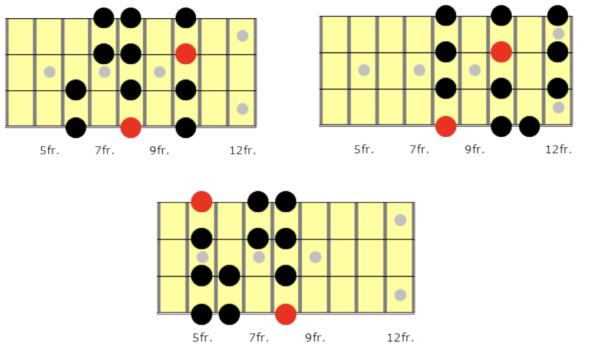 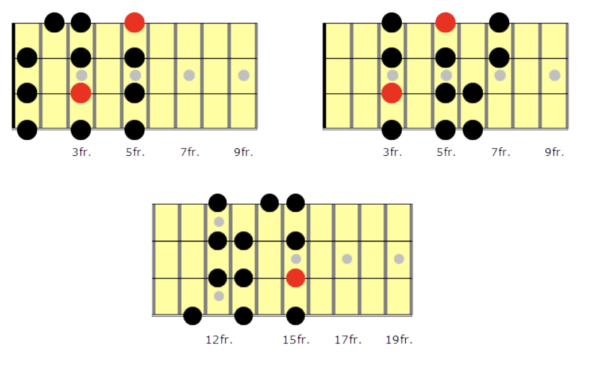 As well as using the modes as scales that we can apply over certain chords, we can also build chords off the scales to create an entirely different sound. Traditionally, we do not tend to say that anything is in the ‘key of D Dorian‘ for example, as technically the key signature would still be the same as C major. However, building chords off of this scale would mean that we could write a song that is rooted around D, while still sharing the same notes as C major. To do this, we simply need to harmonise the Dorian scale the same way you would the major scale but starting from the second degree. This is what C Dorian would look like harmonised in the key of Bb:

Chords Of Each Mode Of The Major Scale

We can do this for any mode, here is a table showing all of the modes harmonised: 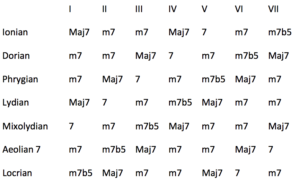 If these voicings are too high for your bass then just move down an octave.