The chord construction lessons continue with Altered Extensions. These are the extensions of the b9, #9, #11 and b13.

So far, we’ve covered extensions of the triad and the 7th chord, but we’ve only looked at the natural extensions – the major 9th, perfect 11th and major 13th. When we see chord symbols with these extensions they are always major or perfect unless stated otherwise. A minor 13b5 would still have a major 6th or 13th and not a minor 6th or 13th. If we want to use altered extensions like a b13 or #11, then we have to indicate this in the chord name. These numbers come after the 7th in the chord symbol.

The most common altered extensions are b9, #9, #11 and b13. The b5 and #5 aren’t classed as altered extensions as they are parts of the original triad. It would take forever to look through every variation of every seventh chord with every altered extension as there are so many of them. Here are the main ones that would be beneficial to learn: 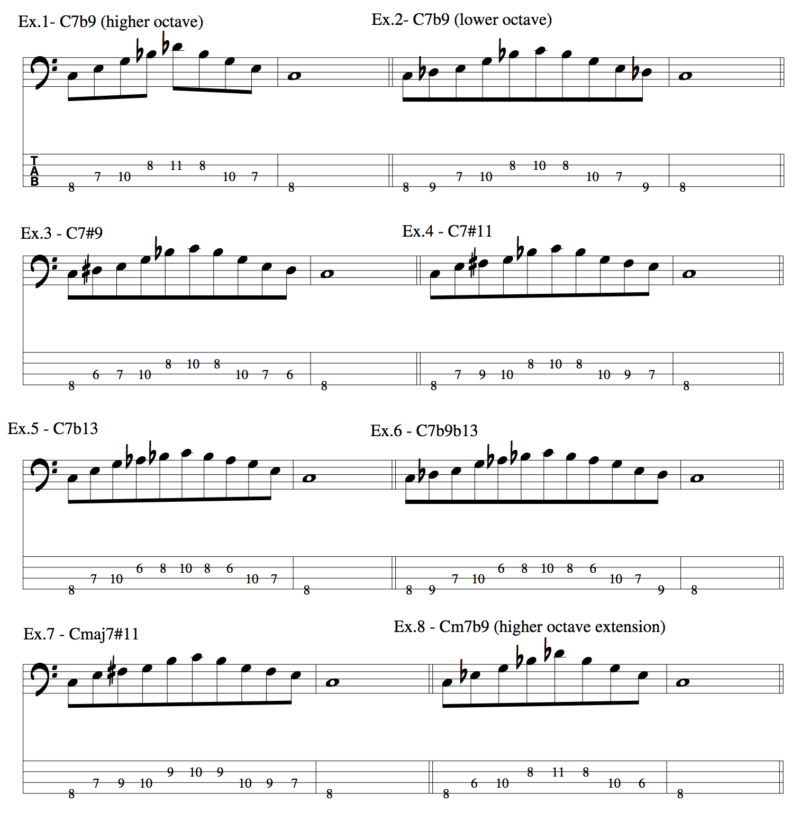 These altered extensions can also be used to outline a particular scale in the harmony without any melodic association. A C minor 11b9b13 chord provides a pretty strong outline of a scale. We have a minor 7 chord of C Eb G Bb then we’ve got the natural extensions of a perfect 11th (F), a b9 (Db) and a b13 (Ab). If we arrange all these notes in order we get a Phrygian scale:

The chord is heavily implying a particular scale for use in melodic material. The more notes that are specified in a chord, the more we imply a certain scale for the melody. The reverse of this is also true – you can build chords from scales and certain scales will dictate certain extensions and accidentals. The harmonic minor scale is a perfect example of this. If we use the degrees of that scale to create a 7th chord and its extensions, we end up with a minor triad or minor (major 7) chord as the tonic triad (7th chord). If we use this as the basis for the extensions then we end up with the major 9th, perfect 11th and minor 13th as the extensions. So we would use a minor maj11b13 chord as the fully extended tonic chord derived from the harmonic minor scale.

add – This is always followed by an extension such as add9, and signifies that you simply need the basic triad and the extension indicated. You do not need the other notes leading up to the extension. For example, Cadd9 would be:

/ (slash) – This is a way of asking for certain extensions to be included.

Once you grasp the concept of adding extra notes onto a basic 7th chord, then altered extensions should seem a little less daunting. Don’t spend hours and hours going over the different chords as it is much more beneficial to understand how they are built first. You need to be able to recognise long chords instantly and isolate the required notes as needed. So if you see a G7#9b13 you instantly see G7 and then deal with the extensions separately.

Try to work on simplifying chords in this way by removing the extensions. Here is an example of a simplified chord sequence to get you started: