Working Out The Key Of A Tune

This lesson covers the problem of finding the key of a tune. Many people try to work out the key of a piece while transcribing or often just wonder what it is within a tune that informs us of the key. In this lesson, I’ll be covering several different methods for working out a key using key signatures, scale, arpeggios, chord progressions and our ear.

There are three situations that require slightly different tactics to find the key of a song:

Working Out The Key By Ear

Working out the chords and playing through the bass line can help you find the key as the tonic (root note or chord), normally feels like home. This means that the song or section may feel resolved when it reaches that chord.

Songs very often begin and/or end on the tonic so this is another way to find out the key. If the ending of the song doesn’t finish on the tonic then you should be able to hear this as it will sound obvious.

The tonic chord is often (but not always) the first chord of the song and usually always the last.

The easiest way to tell the key of a song from the notation is by looking at the key signature. This is represented at the beginning of the stave by a series of flats or sharps (or nothing in the case of C major/A minor).

Here is a list of the key signatures for major keys: 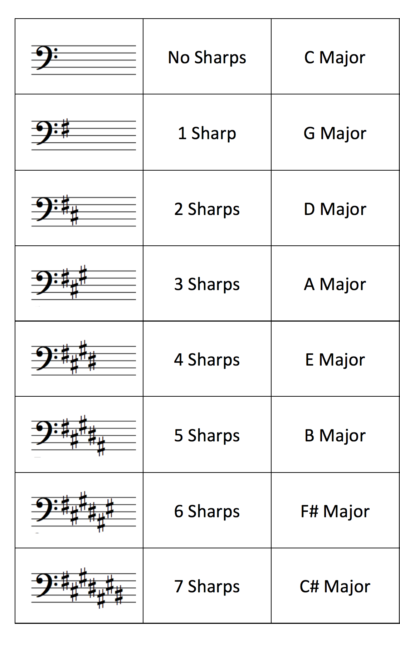 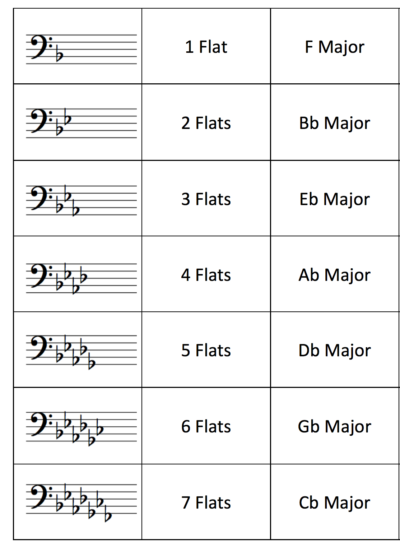 Key signatures are a great starting point for working out the key, but they don’t always give us all the information. If a song is in a minor key, it will share the same key signature as its relative major.

Here are the key signatures again with the relative minors included: 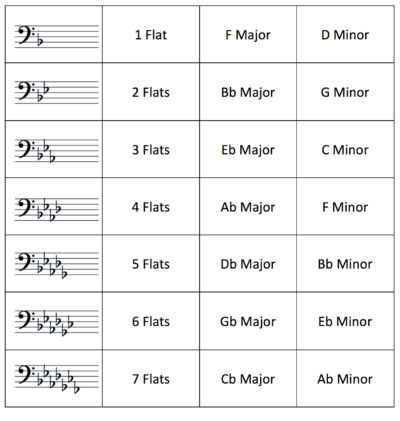 So how can you tell if a song is major or minor if they share the same key signature?

Look for a tonic chord. If a song starts and ends on a G major then it is very likely that the song is going to be in G major.

It is also worth noting that minor keys often use the harmonic (raised 7th) and melodic (raised 6th) minor scales. Spotting these altered notes in the bass line can indicate that the song is in a minor key.

Most people don’t actually know the key of a piece when playing from a chord chart as it is possible to get by without it. However, if you want to really understand the piece and be able to improvise over it confidently then you need to know the key. Chord progressions can be one of the best and most obvious methods of finding the key.

Having a knowledge of the chords in each key will help the key of a song jump out at you quickly. Develop an eye and an ear for harmony in this way by learning the diatonic chords within a major and minor key. Take a C major scale for example:

We can number the degrees of the scale like this:

We can then build chords on each degree to give us a full pallet of chords for that key. There is more information about how to build chords by stacking thirds together in the music theory for bass series on talkingbass.net.

The chords in C major are:

We can extend these chords by adding a 7th to each one.

Notice how chord 5 has now become a dominant chord. This is a really useful way to spot the key of a tune as the dominant chord is found on the fifth degree of every major scale. So if you see a G7 then you can count backwards to find the root note (C). This is not always true but it is a general rule and is a good place to start.