This week we’re looking at arpeggios and chord construction. Specifically Seventh Chords. For a further deep dive into Chord Construction and Harmony, Click Here To Check Out The Chord Tone Essentials Course!

When you start out learning chord tones, it’s common for teachers to limit exercises to a few common patterns such as the Major and Minor Triads then the Major 7, Minor 7, Dominant 7 and Minor 7 Flat 5 chords.

However, this only scratches the surface of chord tones. A more rounded, fundamental study of chord construction principles will enable you to understand any chord presented in a chord chart and provide a better foundation for studying music in general.

The first lesson on Tertian Harmony and Triads can be found By Clicking Here!

Seventh chords are four note chords that we create by simply adding another third to our basic triads.

We already have an exhaustive set of four triads:

To create Seventh Chords we simply add a Third to each Triad in turn. This provides two Seventh chords for each triad.

The basic set of Seventh Chords are listed below as arpeggios built on a root note of C: 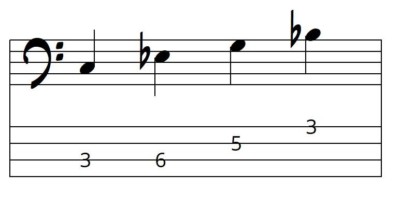 Note that there is only one seventh chord listed built from the Augmented Triad. This is because the stacking of a major 3rd results in a return the root note at the octave.

Exercise: Practice these arpeggios in the order:

Each of the seventh chords covered previously are a result of stacking thirds by way of Tertian Harmony.

However, it’s possible to create more seventh chords outside of the conventional stacked Major and Minor Thirds.

The three most common Non-Tertian Seventh Chords are as follows:

Of these three chords, the Dominant 7 Sharp 5 is by far the most common and often referred to as the Augmented 7 chord.

The arpeggio for each chord is listed below on a root note of C: