How To Play Scales on 1 or 2 Strings

This lesson covers how to play scales on the bass guitar but limited to only 1 or 2 strings instead of the common 3 strings.

We previously looked at playing one and two octave scales using as few position changes as possible. In this lesson, we are going to play the scales in a more linear style by limiting ourselves to only one or two strings. This will expand your knowledge of the fretboard and will allow you to move up and down the neck with confidence.

If we take the three string version of the C major scale from before, we can easily alter it to fit on two strings:

All we did here was move the pattern from the G string to the A string. Repeat this pattern until the position shift is smooth and you are confident that you have the scale under your fingers before moving to different root notes.

This pattern is useful as it gets you to move up and down the neck instead of across – giving you more options in other areas. It also means you can start scales from the D string instead of just the E and A as before.

As you already know, there are different ways to play the major scale from any particular starting position. Here are three fingerings for the C major scale starting on the 8th fret of the E string: 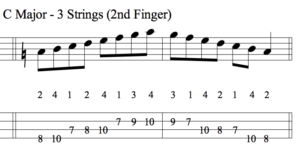 Applying This To Other Scales

We can apply the exact same technique to any scale we want. Have a look at the scales below to see how they can be altered to fit on two strings.

Scales can be extended further to cover two or even three octaves. Below is an example of a three-octave G major scale. This is a great scale to learn as it covers the whole neck and can be played in so many different ways. Try coming up with your own fingerings to really get to know the scale.

Note: The three octave G major scale can only be completed on a 24-fret bass so if you have fewer frets then you will have to start the descent early – don’t let this put you off the exercise though! 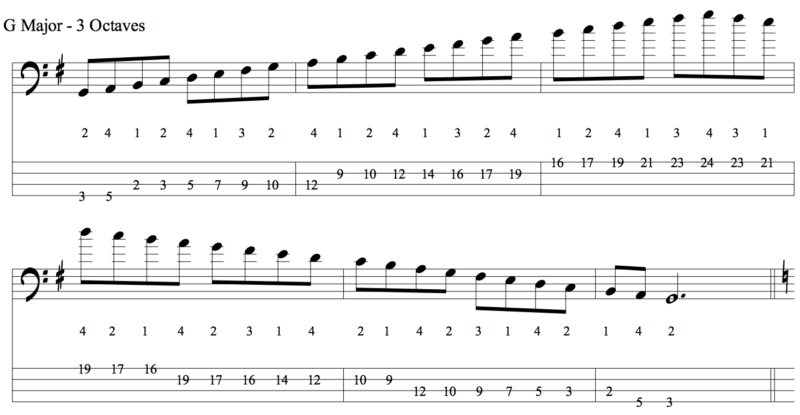 Learning scales on one string will help you understand the construction of that scale and will also help you climb the neck in order to change positions. Use the notation below to see how scales can be rearranged before trying some of your own.