Why EVERY Bass Player Should Learn About Chord Tones

In this lesson,I’m going to talk about why I think every bass player should work on an understanding and knowledge of chord tones and chord construction.

Every piece we play contains a harmonic background of some kind. This is the ‘chord progression’. When we create a bass line for a tune it’s our functional role as a bass player to outline that harmony and to do this we need to play around a framework of chord tones. The notes of the chords.

If you’ve ever found yourself stuck playing simple root notes as a bass line and want to introduce some extra notes for interest. Chord tones are your friend.

What Are Chord Tones And Why Are They Important?

As the name suggests, chord tones are the notes within a chord. You may already know them by the term arpeggio. This is an ordered collection of chord tones.

In general Western music, the majority of what we play is made up of chord progressions. These can either be played as chords or implied through a melody.

All pieces of music have a harmonic background that dictates everything we play or write in a bass line or melody.

Creating A Bass Line From A Chord Chart

As a bass player, you will probably get asked to come up with a bass line from a basic chord chart at some point or another. In this situation, the safest thing that most players do is go for the root notes. This is absolutely fine and is what will be expected of you most of the time, but you might want to make your lines a bit more interesting.

This is where chord tones come in handy. Instead of being restricted to the first note of the chord (the root), you have access to a variety of tones that can help you outline the harmony.

If we harmonise the C major scale, we can see what tones are within each chord:

Now, let’s apply this to a I vi ii V chord progression. The first example below shows a bass line that sticks to the root notes and the second example uses other chord tones to better outline the harmony.

Notice how the second example sounds so much more interesting as it moves around and contains more harmonic information to better support each chord.

The tones we used in this line all work because they are consonant, not dissonant.

However, sticking to chord tones all the time can become a bit bland. To spice things up, you can add non-chord tones into the mix. These have to be used carefully to avoid clashing with the harmony, so you need to know how to use them properly before you start chucking them in everywhere.

Non-chord tones work well as they create a bit of tension that is released by playing a tone within the chord.

Here is the same chord progression again with a bass line that uses non-chord tones to add a bit of tension and release. 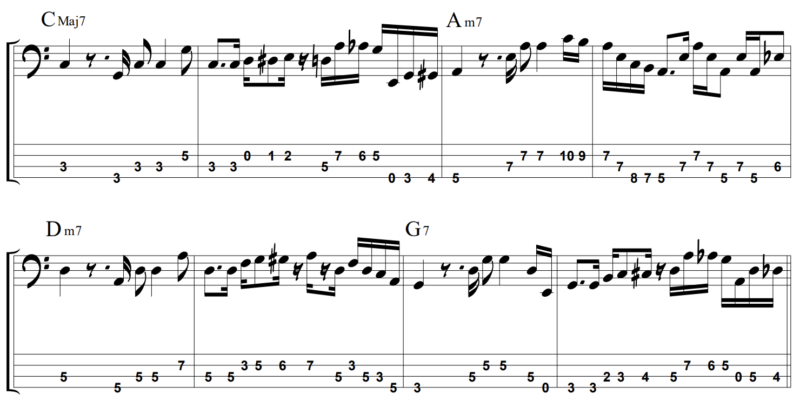