This lesson deals with how to incorporate muted ghost notes into your fingerstyle funk playing.

What Are Ghost Notes?

Ghost notes are notes that are muted while they are plucked to give a percussive sound. They are often used before a note to give a funky feel to the line. To play a ghost note, you simply need to rest the left hand over the string to deaden it and pluck with the right hand.

Playing closer to the bridge where there is more tension will make your ghost notes louder and easier to play.

Have a go at playing a few ghost notes on each string to get a feel for each one.
When you are confident that you can put ghost notes into a groove, try the next couple of exercises.

These grooves are similar to the eighth note rhythms, except the ghost notes are half as long and therefore shorter.

Tip: Try playing the groove excluding the ghost notes. When you add them back in, you will hear that the main body of the groove doesn’t change, but they add a feeling of propulsion by filling in some of the dead space between notes.

Up until now, we have been muting with all of the fingers on our left hand laid across the strings. An alternative approach to this is to mute using individual fingers on the left hand – this can be more precise and handy to have under your belt. A good way to start with learning this is to take a simple chromatic pattern and repeat it whilst adding a ghost note before each tone. After playing the first note, keep the finger resting on the strings to perform the next ghost note. 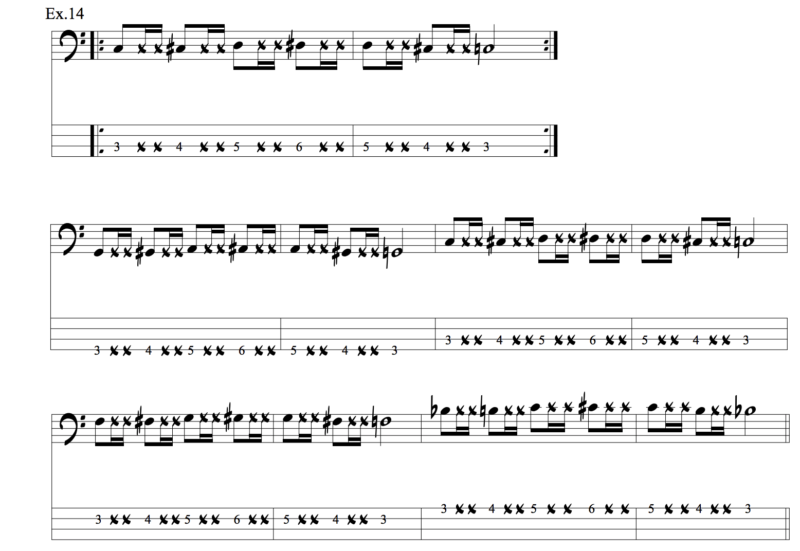 Adding ghost notes to scales is a great way to practice two techniques at once. Here are two variations you can try using sixteenth ghost notes:

December 1963 (Oh What A Night!) – Frankie Valli and the Four Seasons

The riff in this song is based around the Db major scale and uses ghost notes to add a funky edge. Follow along with the notation and video to get a grasp of the part, then slow it down and focus on perfecting the ghost notes and rhythm.

Now we can look at another funk example that we can build on. This line is over an E7 chord – E G# B D – and we are going to be using a cross between an E blues, an E Dorian and an E Mixolydian scale.

The main groove can be altered in loads of interesting ways, so make sure you have mastered that first. Once you have this under your fingers, take one of the variations below and work on that for a while.